Skip to content
Home/Insight Data Co-operative/One proven way to maximise donor lifetime value. You might be surprised?
Previous Next

One proven way to maximise donor lifetime value. You might be surprised?

According to recent research, when a charity joins Conexum’s Insight data co-operative they can expect to realise some attractive gains; average donation value increasing by 29%, frequency of donation rising by 5% and donor lifetime value improving by over 17%.

The results of the research appear to contradict the commonly held belief that donors will be negatively affected if a charity joins a data co-op. In fact, it can sound perfectly logical that if a donor receives additional donation requests their spend and donation frequency would decline.

However, interestingly, the analysis from Conexum clearly refutes this belief.

Conexum operates the largest and most established transactional data co-operative in Australasia, boasting 95 charity members contributing over 2.4M supporter records with a combined donation value in excess of $1.1 billion.

Since 2008, Conexum has helped its charity members to raise millions of dollars through the innovative use of known donor transaction information. All services provided within the Insight data co-operative are built upon the use of multi donors – those donors who have donated to at least two charities. The proven rationale being that the most effective targets for new, or repeat donations, are those that have previously made multiple donations to multiple charities.

Conexum conducted the research in an effort to identify the facts about whether joining the Insight data co-op had had any negative effect upon existing donor status. The following statistics clearly show that despite the concerns of a few non-member fundraisers about the long-term impact of data co-op membership, it has in fact led increased levels of donor giving.

Fig 1 below outlines that the average donors lifetime value increases from $449 to $529 when a donor is seen to donate to multiple charities. This is further expanded to examine what happens when a donor is identified on 2,3, 4 or even 5+ charity databases, Fig 2. 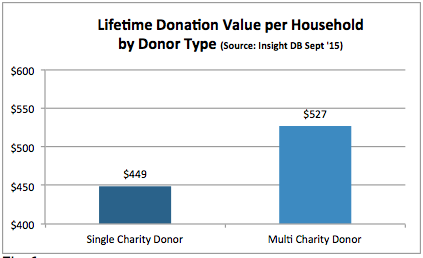 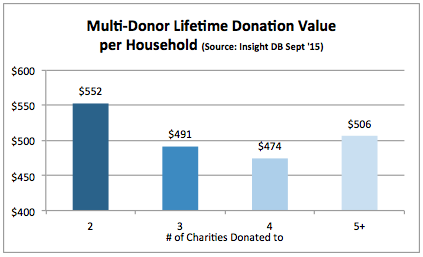 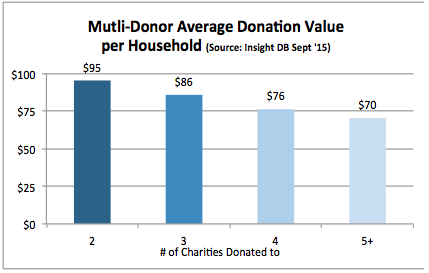 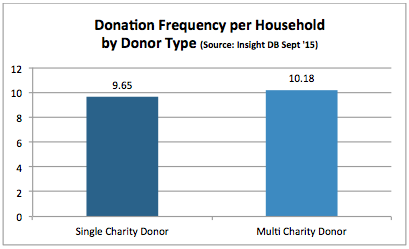 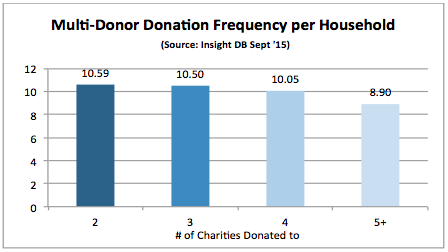 What does the research show?

It shows that typically, donors do not drop one cause to support another; rather they adopt multiple causes. We know that not everyone has a predefined budget for donations and it can be clearly seen that the average donor does in fact increase their donation gift to encompass causes and approaches that appeal to their unique preferences.