Recent analysis of the charity member’s donor transactional data held in the Insight Data Co-operative database has found environmental supporters are the most cause loyal, with approximately 80% of donors giving to other charities operating in the same sector.

This is closely followed by supporters of Third World and Children’s charities with 72.81% and 72.25% of donors respectively giving to other charities operating in the same sectors.

Supporters of charities in the Animal and Human Rights sectors are the least loyal with 51.25% and 52.09% of donors respectively giving to other similar charities in these sectors. 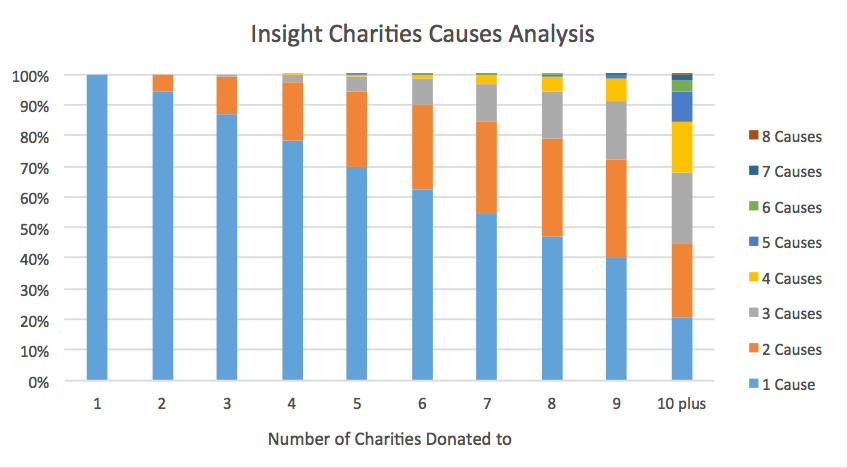 The results show those people who give to charities will tend to be supporting multiple charities operating in the sector.

Once people start supporting four or five charities and upwards, they’re starting to duplicate the number of sectors they support. The more committed givers who support seven plus charities will be giving to charities across four or more sectors.

About the Insight Data Co-operative

Conexum works with over 70 charities. Each charity provides us with a copy of their entire database and indicates which records they are happy to share and which are to be used as a suppression file. The data held on the Insight Data Co-operative database totals over 2.7 million multi-transactor names and postal addresses (people who have donated and/ or have made a purchase with 2 or more members). By merging all this data onto one database, we are able to look at the overlaps between different charities. For example, how many people support Vision Australia and who are also on the Guide Dogs database? We find that this level of overlap is a good indicator of affinity between charities and is a key driver in helping to predict how well prospect names selected from the Insight Data Co-operative database are likely to perform.